I was delighted when House Speaker Nancy Pelosi responded to the whistleblower’s report of Pres. Trump’s fateful July 25 phone call with Pres. Zelensky by swiftly moving toward impeachment. Yesterday, she and her advisers produced just two Articles of Impeachment: One on “Abuse of power”, the other, “Obstruction of Congress.” The first Article deals with  the issues related to Ukraine that were raised by the report of that phone call– the one in which Trump is alleged to have solicited Pres. Zelensky’s help in digging up dirt on the Biden family at a time when Joe Biden was in a strong position to be the Democratic Party candidate in next year’s election.

Yes, clearly, if Trump did that it was an egregious abuse of the powers of the presidency. But did it also, as the Articles of Impeachment allege (on pages 3 and 5), “injure national security and other vital interests”? 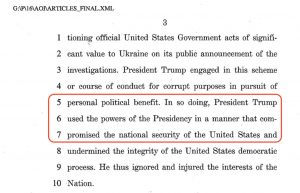 I don’t see why Pelosi and Judiciary Committee chair Jerry Nadler felt they needed to insert a “national security” argument there. Surely, the charge of violating the Constitution by using the power of the presidency to solicit  outside interference in a federal election should have been quite enough, on its own? Having to prove an injury to “national security” or even an  attempt to inflict such an injury would, I think, be much harder, if not well-nigh impossible.

Is it not quite enough to violate the Constitution?

If you want to make the case of national security injury, what would that look like? Yes, on the phone call as reported, Trump looked like a crass, bullying buffoon. But he looks like that in many encounters with foreign leaders, anyway. Will the impeachers try to make the case that there was something specifically injurious about Trump’s alleged behaviors toward Ukraine as revealed in the phone call episode? I hope to heck they don’t try to make the case that it is a “national interest” or even a “vital national interest” of the United States that U.S. military aid be shipped post-haste to Ukraine, or that Ukraine be pulled into NATO, or whatever…

And this is especially the case when Pres. Zelensky has just had his first meeting with Putin (and Macron and Merkel) as part of the resumption of the de-escalation process between Ukraine and Russia that Zelensky had promised to the large proportion of Ukrainians who voted him into office last April and then voted his “Servant of the People Party” into a commanding position in the Ukrainian parliament just days before the fateful phone call.

I  hope this isn’t  yet another example of the Dems engaging in the dangerous demagoguing on Russia (and Ukraine) that I blogged about here, recently.

1 thought on “Trump’s impeachment: Why include “national security”?”