Here were the main developments of world-historical impact, in 1559 CE:

To be frank, one of the reasons I’m so interested in the whole wokou pirate phenomenon is because it seems to me to be a longlasting aftermath of the decision an earlier Ming Emperor had apparently taken, back in 1435 CE, to abruptly end a maritime exploration project that until then had been wide-ranging, well-funded, and stunningly successful. These were the explorations undertaken in extremely large and capable ships, all across the Indian Ocean including to the coast of East Africa, under the leadership of Admiral Zheng He, acting under the direction of the Yongle Emperor. 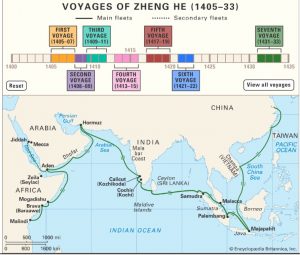 The Encyclopedia Britannica page on Zheng He has a fascinating interactive graphic through which you can chart the seven major voyages he led between 1405 and 1433.

Zheng He had a truly fascinating personal biography– from a Hui (Chinese Muslim) family, descended from Mongols; captured when the Mings took over, castrated, impressed into imperial service, etc…  But what really interests me, in addition to Zheng He’s navigational record, is the decision the Yongle Emperor’s successor, the Hongxi Emperor, apparently took to end the idea of having any navy at all. Clearly, I need to read up a lot more on this. But imagine how different world history might have been if the Hongxi Emperor had not taken that decision.

Also, clearly, that whole process of Portuguese naval insertion into South-east Asia and the various other parts of the Indian Ocean they traversed would have been very different had the Ming Navy still had a presence in those waters…