I’ve been researching and thinking a lot about the forms of settler colonialism unleashed and maintained by “White” European nations– mainly, my own people-of-birth, the British– against people of color in many parts of the world. At times, doing this research– reading these accounts, seeing and trying to understand these pictures– makes me deeply, deeply sad; and it will probably have the same effect on many of you who follow me down this path. But being able to “wallow” in sadness and letting it paralyze you is a form of “White” privilege. I strongly believe that all of us who are “White” need to learn, reflect upon, and try to understand this globe-girdling story of the many forms of settler colonialism that “White” countries have engaged in for the past 500 years– since it is that practice that built the (im-)balance of global power that we see today.

I’ve been thinking about the successive waves of genocide that the British settler-colonial leaders and communities engaged in in the land-mass we currently know as “Australia”. This story is very important in its own right. If you ever wondered how it was that that vast continent came to be a “White”-dominated, British-cultured country (and part of George W. Bush’s “Five Eyes” gang of British-cultured countries!)… with only a few remaining patches in which the country’s surviving Indigenous peoples live– then, you could visit this Sovereign Union website, and click on either the “History” or the “Images” tab at the top. Or, look at some of the disturbing images on this “Welcome to Country” site. Or, do some research of your own into what happened to the Indigenous people of Tasmania…

The history of British genocides in “Australia” also occupies a special place in the global history of “White” settler colonialisms for a number of reasons:

It is one of a handful of instances in which the brutalities of the early “contact” between “White” settlers and Indigenous people came late enough in history that there is photographic evidence of some of the atrocities committed in that crucial period. The only other major instances of this that I can think of are the large-scale atrocities the Germans committed against the Herero and Nama peoples of Namibia in roughly 1904-1906, and the atrocity-laden expulsion and ethnic cleansing of Indigenous Palestinians that the infant “Israeli” state committed in 1947-49.

The atrocities the British committed against Indigenes in “Australia” lasted for many, many decades– that is a huge land-mass they were conquering, after all. But the atrocities certainly lasted until the early decades of the 20th century; and thus, as in Namibia and Palestine, there is shocking photographic “evidence” of what they did.

Images like the photo of the Indigenous Australian “chain gang” at the top of this post or the one of chained Indigenous Australians under the smirking eye of a “White” supervisor, at right, are extremely disturbing. You can find many more at the “Sovereign Union” website linked to above.

Stories and images like these ones from “Australia” can also establish a vivid link, in the US cultural milieu, between the struggles of African Americans and of Native Americans.

Here in the USA, by and large, among the many atrocities that settlers visited on Indigenous people, enslavement was not the most common. Attempts were certainly made by settlers here to enslave Native Americans (and even, some “White” traders exported a few enslaved Native Americans to plantations in the Caribbean.) But very often members of the Native communities here were able to flee from the violent, gun-wielding settler hordes, though they lost access to their traditional hunting, fishing, and farming grounds by doing so. So, in order to get a totally captive, culturally “broken” workforce, the settlers here in North America ended up importing many millions of enslaved people from Africa…

In “Australia”, the violent, gun-wielding settler hordes were able to capture, culturally break, and enslave a  larger proportion of the Indigenous people. So there, you had enslaved people who were both Black and Indigenous. (And yes, often the “excuse” the Bible-wielding settlers would use for enslaving the Indigenous people and putting them to work in chain gangs was because they had committed “crimes” and needed to be “punished.” It was a School-to-Prison pipeline without even any pretense at a “school.”)

Oh and lest we forget, the settlers (and the missionaries who accompanied them) were also there to “civilize” those “savages.” And yes, that very often involved taking the Indigenous communities’ children from their families and putting them into boarding schools, or giving them to “White” families to raise. Anything to wipe out any traces of their “savage” and “primitive” culture.

Then, it seems clear that the lengthy, multi-century process of genociding the Indigenous peoples that the British settlers had been pursuing in the land-mass of “Australia” provided a good example to the settlers that Johnny-come-lately empire-builder Germany started implanting in Africa, in the mid-1880s.

Here is a photo from Namibia, around 1905, showing captured Herero men chained together in work-gangs by very heavy chains in exactly the same way the British settlers had chained  the captive  Indigenous Australians.

You can learn more about the twin genocides the Germans committed against the Herero and Nama peoples in Namibia, here or here.

Clearly, Germany had learned a good few tips about genociding, long before Adolph Hitler adopted the “Final Solution” against the Jews and Roma, in 1941.

As I said above, researching this history can be deeply disturbing. I find that photos like these ones somehow “speak to me” in a way that is more visceral and more incontrovertibly “probative” of the underlying facts of enslavement, degradation, dispossession, dehumanization, and mass slaughter than any number of lithographs or other hand-drawn prints that preceded them in the print mass media of the 19th century. The fact that they are photographs also reminds me that those acts were committed in the modern era (and by members of my own national group.)

There is a big question, of course, as to what the intention of those photographers was. True, the different people who created those different photographic images–and there were quite a lot of different images, though many telling a similar kind of story– may have had different motivations or intentions.

Here in the USA, photography started emerging at around the time of the country’s big civil war, in the early 1860s; and in those days, people of some means who went off to fight would often have a “Daguerrotype” portrait photo of themselves made– a lengthy and complex process– before they left for the front. They did it so that could be a memento for their family members while they were away, or a memento mori, should they never come back from the war. Poignant.

Then, there are “documentary” photographers who make images of people in hard circumstances– including, even a few, of enslaved people here in the USA back in the early 1860s– as a way of documenting their plight, and often with a view to arousing sympathy for them and motivating “White” people rich enough to buy the books and newspapers bearing those images to help to end their situation.

The taking of of photos like the ones I have shown above– and I did so only with trepidation– seem to have had a very different  intent. They are much, much more like the prideful “trophy” photographs that “Big Game” hunters (usually also “White” people) take of the lion, tiger, or giraffe that they have just shot. Or, God forbid, like the “trophy” photos that U.S. White supremacists would take long, long into the 20th century, of lynchings of African Americans and the gleeful “White” crowds that attended those gatherings. (Those photos often would get printed up as postcards, so the attendees could memorialize the event: A very different kind of memento mori.)

So these “trophy” photos I used above were captured, I am certain, by “White” photographers who never won or even sought any permission from the people portrayed in them. Plus, I understand that many Indigenous Australians– like numerous other peoples around the world– believe that if you “take” (that is, capture) an image of them photographically, then you may also be “taking” something vital from their very spirit. So I apologize for using these images. But I do so because I think there are many other people out there in the world who will find them, as do, deeply haunting in their power– and powerful in their haunting. 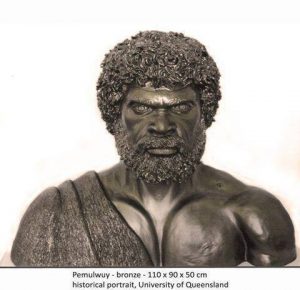 But let me finish with another image. It is a photo of a bronze statue of Pemulwuy, described in this “Sovereign Union” collection as “the fiercest resistance leader to the European invasion of Australia, which began with the arrival of what is called the First Fleet in 1788.” Look at more of the images of freedom fighters on that website, too– and of course, at the many informative documents there!