There are, it seems to me, two distinct kinds of horizon that anyone considering the effects of Covid-19 on global politics and society needs to look at. One is the time horizon: Crucially, how soon until we can see the widespread (or universal?) delivery of a safe and functioning vaccine against this coronavirus. The other is what I call the “scope horizon”: How deep will be the changes that the explosion of this plague inflicts on societies everywhere? Of course, they are linked. If someone could magically discover, manufacture, and globally deliver a safe vaccine against Covid-19 within, say, a month, then the scope of the changes wrought by the plague would be much smaller than if we’re talking about 18-24 months– though still by no means trivial.

Too many people (led by Pres. Trump) have consistently grossly under-estimated the time horizon; though at least we always have Dr. Anthony Fauci and other real experts persistently telling us that development, testing, and delivery of a new vaccine could take 18 months or more. Regarding the “scope horizon”, however, nearly everyone seems to be grossly under-estimating the scope of the changes this pandemic is causing. Many people talk about “getting back to normal life”, as though that might even be a possibility. Others talk a little archly about getting to “a new normal”– as though just a few tweaks in the old normal will be sufficient to allow the resumption of something very similar to pre-Covid life. But after deep consideration of the matter, I have concluded that no return to anything recognizably like the pre-Covid world is likely– or even, in most countries, possible. It is particularly hard to see how a return to the pre-Covid world is possible here in the United States. And the sheer weight of the domination  the USA has exerted over all aspects of the “international system” since 1991 means that many other aspects of the lives of all the world’s other countries will also be deeply affected– however successfully they meet the immediate challenges that the Covid poses to their own societies.

Meanwhile, at a global level, the geopolitical “balance” between the world’s major power centers is being shifted extremely rapidly by this Covid crisis– primarily from the USA to China but with significant other shifts occurring, too. Such a global-scale shift in geopolitical power carries numerous risks at many levels, especially given the capabilities the now-deeply-threatened power centers in the USA have for destroying large portions of the world and/or the people who live in them through the massively destructive military and financial weapons in the USA’s world-controlling arsenal. This shift does also present some previously hard-to-imagine opportunities for building a more truly cooperative (and therefore, resilient) global order. But I don’t think we can start to build it unless we understand how grave the challenges– not just to the current, or pre-Covid, state of affairs– but to human life itself– really are.

Let’s for a moment examine some of what the shocking images in the montage above tell us. These were all news photos of U.S. residents lining up in cars to get free food from  community-based “food banks” in various parts of the country in mid-April… Yes, we learn from the pictures that the need for free food handouts had become immense. But we also learn– or are reminded– that throughout the United States, these non-governmental food banks have existed for many decades, because in the absence of anything like an adequate social-safety net, widespread hunger has already existed in the United States for many decades. (And we learn, too, that large phalanxes of people currently experiencing or imminently facing hunger in the United States drive fairly nice-looking cars. These are not the broken-down jalopies of the Tom Joad era. But the fact that so many people apparently need to have cars in order to access an emergency service like a hunger-alleviating food program tells us a lot about the paucity of public transit systems and the heavy reliance on income-consuming, climate-destroying private autos experienced by people in nearly all parts of the country except New York City.)

The reporting coming out on the struggle to survive in densely populated, Covid-heavy parts of New York City like Queens or the Bronx, is even more disturbing.

The vast majority of people around the world must be gobsmacked as they watch this news reporting coming out of the United States. This is happening— in the richest country in the world, and one that for the past 30 years has claimed to be (and arrogantly acted as) the “leader” of the  whole world?

And they also have constant, vivid reminders of the extreme dysfunction at the apex of the American system, with a president who gives a near-daily grandstanding performance of breathtakingly anti-scientific and mendacious inanity while the scientists in the room cower in disbelief… And then, he and his Treasury Secretary  shovel the vast majority of the coronavirus bailout money to the big U.S. banks and corporations while managing to persuade even the Democrats in Congress that what they’re signing off on bears a resemblance to Pres. Franklin D. Roosevelt’s Depression-era “New Deal”…

Economist/historian Michael Hudson elegantly took that claim apart in this mid-April interview (transcript, here.) He noted that, unlike in the New Deal era, the coronavirus “bailout” money is not being spent by the government to employ people to do value-building–and much-needed– work in vital infrastructure sectors; but instead, most of it is going to banks and big corporations. (And even most of the money being sent to citizens directly will end up with landlords or debt-servicing companies.)

what pretends to be a coronavirus bill is going to say, “You think the virus hit you? Wait till we hit you with the financial bill.” The financial bailout aims to enable the financial sector to extract so much money from the economy and drive so many small businesses under that the big venture capital firms and private equity can pick them up at low all prices. You could call it the “Monopolization of the US economy” bill or the “Contributors to Washington politicians” bill.

There was a wish list that the banks had, the real estate interests and corporate lobbyists, that they’d been saving up for just such a crisis opportunity. The coronavirus is equivalent of 9/11. As in 9/11 when President Bush and Cheney pulled out the Patriot Act that they had in their drawer just looking for an excuse. Right now the coronavirus, the Trump-Pelosi bill gives the banks and the real estate sector an excuse to not only be bailed out as if they’re losing money, but to evict their tenants. 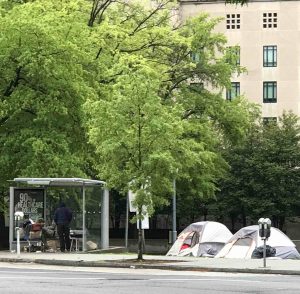 The situation of so many Americans, including right here in Washington DC, is already very bad. (See this small homeless encampment right outside the State Department, at right.) It will get worse, possibly a lot worse. And it will stay very bad for a very long time. Not just because of the time it will necessarily take to discover, test, manufacture, and adequately distribute (worldwide!) a vaccine that can end the continued depradations of this coronavirus, but for a raft of other reasons stemming from weaknesses that have been deeply embedded in American society and culture for some decades.

In addition to the rapacity of the financiers and their “capture” of the executive and legislative branches of government (as noted above), these include:

In the dystopian 1973 movie “Soylent Green”, a combination of overpopulation, pollution and climate catastrophe threw New York City (and the whole USA) into a catastrophe in 2022.

The movie-makers forgot to throw in a coronavirus. Covid-19 is now bringing many aspects of the scenario envisaged in that movie– though hopefully not the cannibalism?– into existence two years early.

And talking of meat-eating, there’s the terrible crisis in the country’s meat-packing plants– and Pres. Trump’s even more appalling response of designating meatpacking to be an “essential industry” so that he could force the workers to stay at their jobs. Even Brent Orrell of the reliably rightwing American Enterprise Institute had this to say about the situation:

There’s an even darker side to the situation… Somewhere between 30 and 50 percent of the meat-packing workforce is made up of undocumented workers from Mexico, Guatemala, and El Salvador as well as immigrants from East African nations. As Smithfield Foods’ statement on the Sioux Falls outbreak indelicately put it, the living conditions of these immigrants are “different than they are with your traditional American family.” Get it? They are in overcrowded houses with inadequate sanitation. “They” aren’t like “us”. Since many — perhaps a majority — of them lack legal status, they are unable to defend themselves against exploitative or coercive labor practices. As recently as last August, ICE agents were rounding them up by the hundreds for deportation.

We need to make up our minds on a number of issues. On the one hand, we shower praise on “essential workers” in hospitals, grocery stores, sanitation and other occupations. On the other, we engage in acts of economic coercion with vulnerable populations who do some of the dirtiest, most difficult, and most dangerous work around. We build a fence along our southern border to keep out illegal immigrants but then seek to force those who are already here to do jobs American citizens simply will not do.

(Hat-tip, once again, to Yves Smith of Naked Capitalism.)

And meanwhile, the U.S. government struts around the world telling other countries what to do and using many of the powerful tools at its disposal to punish them if they disobey.

Primarily, these days, these are not military tools but the financial tools that it uses to impose on governments and companies all round the world compliance with the super-punishing sanctions regimes it has quite illegally slapped on whole countries like Iran, Syria, Venezuela, Cuba, North Korea.

In an era of pandemic that threatens the vulnerable populations of those countries much more acutely than it does the United States.

Can you believe that?

(Learn more about the impact of sanctions, here.)

I had intended to complete this piece by looking at the implications of all the above on the global “balance of power”– that is, the balance between the US government, which represents about 5% of global humankind and the governments and peoples that make up the other 95%. But there have been a lot of ambulance sirens on our street this afternoon. So I’ll leave the second half of this essay until another day.

This edition of JWN, launched in 2019, is a place where Helena Cobban posts a variety of personal writings. Her more formal writings are published at Globalities.org. The "vintage" edition of JWN, which contains posts published from early 2003 through 2019, can be found here.