I had this piece published at Mondoweiss yesterday, which explored the many parallels between the militant form of excusivist ethno-sectarianism known as Hindutva, as practiced by Indian PM Narendra Modi. Then today, they ran this piece on the “Story of Christmas”, which was a re-run of the version I published under a different title at the Just World Ed blog, three years ago.

The title we used for it at JWE was “The Story of Christmas told for everyone (especially my grandkids)”, and I admit I’m still kind of fond of that title. I really did write it with my grandkids in mind. I am blessed that we now have six of these little people in our lives, ranging in age from 11 years to 18 months. Four of them have an Arab-Christian grandparent and four of them have a Jewish parent, so I really was trying to tease out a way of telling the story that would be informative and appropriate for them as well as a narrative that I could sign onto.

I truly didn’t want to get into the topic of a “virgin birth.” 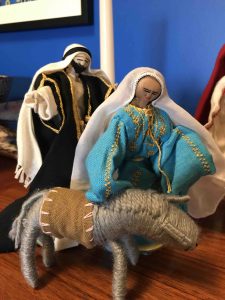 I have in the back of my mind an idea to actually make a little children’s book out of my version of the Christmas story. I was thinking to have the illustrations be staged little scenes featuring portions of our family’s longstanding, beautiful, handsewn Christmas creche set (as pictured above.) To the right, you can see Maryam, Joseph, and the donkey, for example. I also thought maybe I could buy some old GI Joes on eBay so they could depict the soldiers at the checkpoints. (I’m not sure they’d be the right scale?)

Then, I thought, no, to be affordable this book has to have a black-and-white interior…

Anyway, Happy Holidays and a Cool Yule to everyone!

1 thought on “Two pieces on Mondoweiss, on Hindutva and Christmas”