Bill the spouse and I have been lucky enough to get away from Washington DC for a few days, to enjoy the relatively bucolic charms of our former stomping-grounds in Charlottesville, Va. Today, we walked over to the Memorial for Enslaved Laborers that the University of Virginia opened on its famed “Grounds” recently. It is a beautiful memorial, evocative in some ways of the Vietnam Vets Memorial in Washington DC but with a lot of rich layers of additional meaning.

Thomas Jefferson, the founder and original architect of the University, was also the principal author of the “United States Declaration of Independence”, the document by which the settler colonials here on the east coast of this great North American landmass, Turtle Island, announced their Ian Smith-style Universal Declaration of Independence from the metropole in 1776. The USDI has 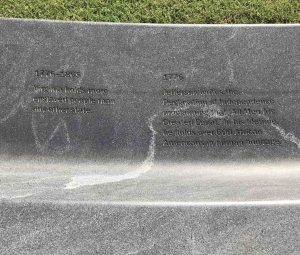 much ringing language about “all men are created equal”, but in truth it was only “White” males of property who were allowed to enjoy its version of equality… And one of the forms of “property” that Jefferson and many of the other signers owned was in the form of enslaved persons of African origin.

In the 48 years between the day the ground was first broken for building the ornate, Palladian-style pavilions of Jefferson’s architectural creation and the day in 1865 when slavery was finally abolished in the United States, some 4,000 enslaved laborers worked in the project of the university, first as construction workers and craftsmen and later also as janitors, laundresses, groundskeepers, lab assistants, and personal servants– both for professors and for the extremely privileged bunch of young “White” men who came to study in Jefferson’s famed “Academical Village”.

UVA (as it is called) did not even admit African Americans to be students until 1974 or so, though now there is a swelling cadre of Black alumni; and starting around ten years ago they– and many Black residents of the small town, Charlottesville, in which UVA is located– started to agitate to have some form of memorial erected to the university’s enslaved laborers. In 2013, UVA’s first female President, Theresa Sullivan established a Commission on Slavery and the University.  The Commission established a consultative process (short video here.) Construction started in January 2019– a great short video of the construction process is here. And it had a soft opening back in April. The architecture critics for both the WaPo and the NYT have given it rave reviews. You can find a good description of the design here. 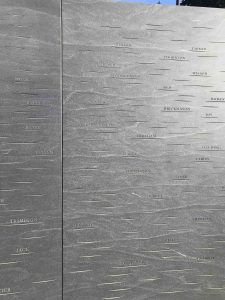 One big feature of the memorial is that on the inner side of the outer of the two stone rings are inscribed 4,000 spaced-out horizontal slashes,  each representing one of the enslaved laborers. No personal or professional details are known about the vast majority of those persons. For the 950 or so about which something is known, that fragment of information is inscribed above the mark. Sometimes, it is just one name. Sometimes, it is two names. Sometimes it is a job-role, or sometimes a relationship to someone else. Most times, though, nothing is known and the slash is bare.

We went on a sunny day. But a key feature of the slash-marks

is how they look after rain (see right.) Several of the architecture critics have said these “look like tears”. To me, they could equally well look like blood, coming from the bullwhipped body of an enslaved person.

On the inner of the two stone rings, there are inscribed a series of short chronological  records of events related to the topics of enslavement and the University. One of these records states that in 1818, “Gilbert, working for a UVA contractor, runs away. The university overseer captures and returns him.” (There is at least one other reference to the university “overseer” returning an enslaved worker who had run away.) There is no description of what form of punishment was dealt to the recaptured person, but one may assume it was pretty violent.

Another of these short records refers to the large-scale uprising of enslaved persons in Suffolk County, Virginia, in 1831, known as Nat Turner’s Rebellion. Numerous published accounts of the rebellion and its aftermath noted the savagery with which the rebellion was put down.

These are the two sequential (read right to left) inscriptions dealing with that period.

UVA was not, of course, the only placed closely associated with Thomas Jefferson that was built and maintained with enslaved labor. The other was the extremely indulgent, slave-powered plantation he built for his family near Charlottesville, called Monticello. Monticello was always a truly crazy project. In an era in which land transportation was extremely costly and difficult compared with navigation by boat, he built his Monticello, which was supposed to be a self-sufficient or even profit-making agricultural venture, on the top of a mountain. No wonder that when he died in 1826, his estate was left massively in debt, and his inheritors felt themselves obliged to sell off most of the enslaved persons who were working there. Those sales, like many such sales in that era, split up families and brought considerable new hardships to the enslaved.

The only enslaved persons whom Jefferson did manumit in his will were the two children of Sally Hemings who were still enslaved. Sally H was his favored sex-slave/concubine–as well as being the enslaved half-sister of his late wife, Martha Jefferson, having been conceived as a result of Martha’s father’s rape of one of his enslaved women. What a terrifying era for enslaved women to live in.

Anyway, the Monticello Foundation established a few decades ago by Jefferson’s “White” heirs to look after Monticello’s house and grounds has, over the past 20 years, moved a considerable distance toward openly acknowledging the slavery underpinnings of that whole project and even the fact of his sexual relations with Sally Hemings. (The latter happened especially after DNA testing proved his relationship with a number of Hemings heirs.) They even, now, have an International Center for Jefferson Studies that sponsors a number of conferences, etc., on the history of Trans-Atlantic slavery.

All of which might prompt the question: So what? My view, as I pursue my own research into aspects of England’s role in Trans-Atlantic slavery, is that increasing our understanding of the degree to which the rise of the “West” in world affairs was dependent on, and fueled by, the horrors of the Trans-Atlantic slavery system may be a helpful  precursor to truly reparative action, though it is by no means, in itself, a sufficient step.