Living in DC, one comes across opportunistic Astroturf organizations who come here to generate “images” of themselves as feisty, strongly supported “grassroots” orgs that presumably they then show to their financial backers to get more gobs of money. Often, they are laughably unsuccessful at presenting this picture. (The Saudi-supported, anti-Tehran MEK comes to mind…) Today, I bumped into around 45, mainly Chinese-ish, people who had been brought to the White House to sit on the southern sidewalk of H St NW and chant slogans in English and some form of Chinese. In English, they were shouting “CCP lied; Americans died” many times, and also “Take down CCP!”

To be honest, they weren’t shouting anything when I first encountered them sitting there, around 30 yards east of the main #BLM area of that portion of H street. They were just sitting there on the kerb with their mass-produced signs, in their mass-distributed “Guo Media” tee-shirts. I asked a small group of them if they were Falun Gong. “No, not Falun Gong,” a couple of them said. Then I saw the logo on their tee-shirts and asked “What is Guo Media?” This, none of them wanted to answer, but they pointed along the row to one of their number and said, “Ask him!” (That’s another sure sign of an Astroturf rent-a-crowd: they don’t even really know why they’re there or who it is that’s brought them here.)

I told them I thought this whole traffic-free #BLM area in which they were sitting was really part of the BLM movement and asked, “Do you support Black Lives Matter?” None whom I asked seemed to want to answer. “Ask h 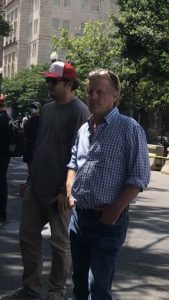 im,” a couple said– nodding toward the same guy they had indicated earlier.

Then, a slightly large blond guy came toward me from the middle of the street where he and a small group of other “White” guys had been conferring. He tried to get right in my face and he was unmasked. “Please could you step back,” I asked him. “Also, wear a mask.” He did at least step back. 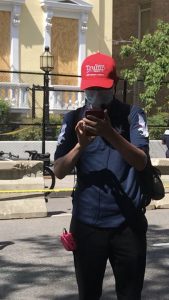 Immediately– coming to drown out my conversation with him– a woman standing beside red-hat guy and equipped like him with a loudspeaker hanging from her belt and a voice mike poking along her cheek from under her hat started up the chanting: “CCP lied: Americans died” etc etc, over and over, very loud. The rented crowd followed along, and the whole performance drowned out my ability to interview red-hat guy.

Well, no-one seemed to want to tell me who Guo Media is (or, indeed, whether these people supported BLM.) To be honest, I’d never heard of Guo Media at that point. But after I got home and started noodling on the intertubes I realized what it was. It’s the outfit run by a super-shady character called Guo Wengui, that last year signed a $1 million deal with Steve Bannon.

This year, in late January, Bannon (with, presumably, funding from Guo?) started a new, very anti-Beijing multi-media conglomerate called “War Room: Pandemic”. You can read more about it here. 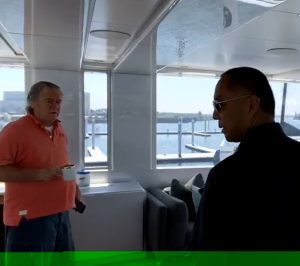 Also, if you want to enjoy a hollow laugh, you can go and watch the first few minutes of this Guo Media video, which features a very overweight Steve Bannon wandering in and out of the shot during a very weird video production…